Ian and his beloved Uke 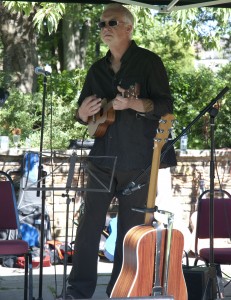 This Is Ian performing in Eltham as part of an arts and crafts weekend which he took part in on an extremely hot Sunday 26th June. Ian performed two acoustic arrangements which were arranged by Ian and Steve Mac. The first one was the Supertramp classic “The Logical Song” and the second was a Santana medley featuring “Samba Pa Ti” and “Oye Come Ava”. Ian came on again later to join Steve Mac and Gordon Mark Webber playing Ukelele on the Rollin Stones hit “Honky Tonk Woman”

This site uses Akismet to reduce spam. Learn how your comment data is processed.