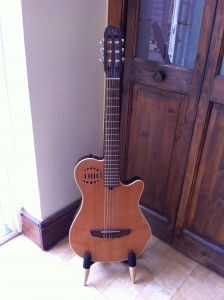 Here is my Godin Multiac Grand Concert Duet Nylon which I bought last year for a bargain price at Acoustic Avalon. It is the slightly cut down version in that it does not have Synth Access, but it is remarkable in that it is virtually a solid bodied classical guitar with some chambers and fancy electronics which reduce feedback. It has a low action and plays almost like a solid bodied electric guitar. Like most of my guitars, it is quite heavy, and I would love to know why I keep buying such heavy guitars?

By the way, Acoustic Avalon is an acoustic guitar show run by Sheehans Music, Leicester, with almost non-stop acts on stage over the weekend. There is also a live show is on Saturday night with several headline acoustic acts. I learnt about Acoustic Avalon as a particular hero of mine, Eric Roche, had connections with the event before his untimely passing.

Like Steve Mac I am left handed, but unlike him I play the “conventional” right handed way. It makes more sense to me as my most adept hand is my left hand, and which one does more work when playing guitar? This means that all you right handers out there have got it wrong.

What do you think?
Ian

This site uses Akismet to reduce spam. Learn how your comment data is processed.